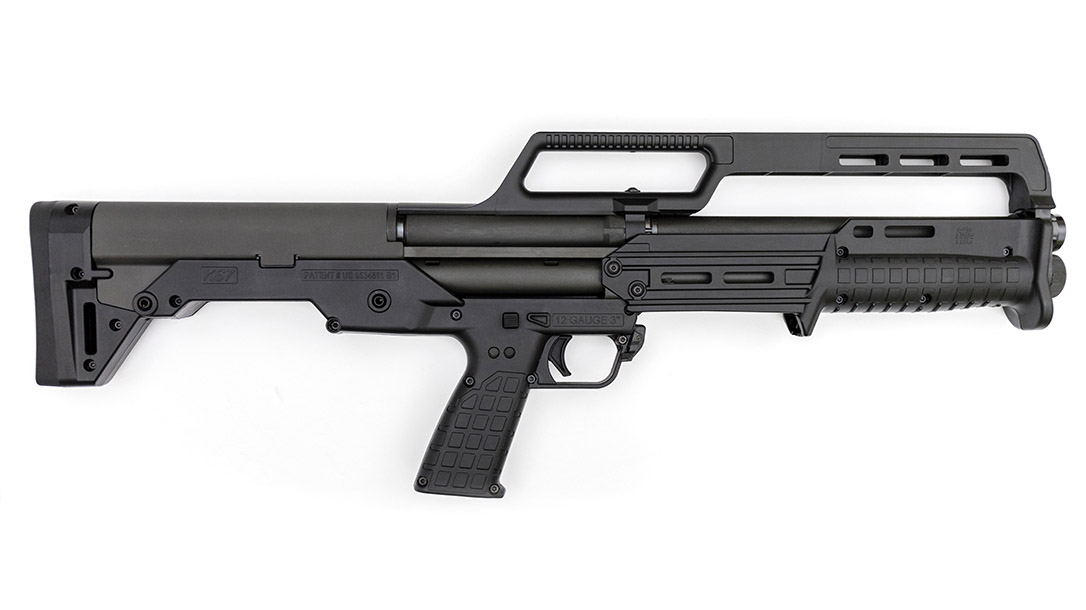 KelTec first unveiled its KSG bullpup shotgun in 2011. This pump-action design features twin magazine tubes beneath the barrel that each hold seven 2 ¾-inch shells for a total capacity of 14+1 rounds. It also accepts 3-inch shells, which reduces the capacity by one shell in each magazine. The user can manually switch between the two magazine tubes as well.

The KSG really took off after some bugs were worked out in a second-generation model, and special operations units in the United States, Great Britain, France and South Korea took notice. The gun is still quite popular today, but more recently, KelTec introduced a new version designated the KS7.

The biggest difference between these two shotguns is the magazines. To reduce weight and make the KS7 a bit handier, it has a single magazine tube that holds six 3-inch shells or seven 2¾-inch shells. This reduces the unloaded weight by a pound—to 5.9 pounds compared to the KSG’s 6.9 pounds. Both models still load and eject from the bottom of the receiver. This helps keep debris out of the action and provides for ambidextrous operation. The crossbolt safety and pump release lever at the front of the triggerguard are ambidextrous as well.

The lower portions of these guns are fashioned from high-strength polymer while the receivers, barrels and magazine tubes are carbon steel. The KS7 also has a black and non-reflective charcoal gray finish. The pistol grip on the KS7 is similar to the KSG’s, with texturing consisting of raised squares for plenty of traction. This same texturing can also be found on the forearm/pump handle, which is grooved to keep your support hand in place—something the KSG lacks.

Then there are the sights, which represent another difference. While the KSG has a rail mounted on top of its barrel for the attachment of iron sights or optics, the KS7 has a carry handle (like a traditional AR) extending from the midsection of the gun to the muzzle. The top of the handle is like a trough and directs the eye toward the front sight, with its green fiber-optic insert, and the target beyond. There’s no rear sight beyond a tiny oblong stub that can be aligned with the bottom of the front sight, but a single hole in the handle is provided for a screw-on mount. 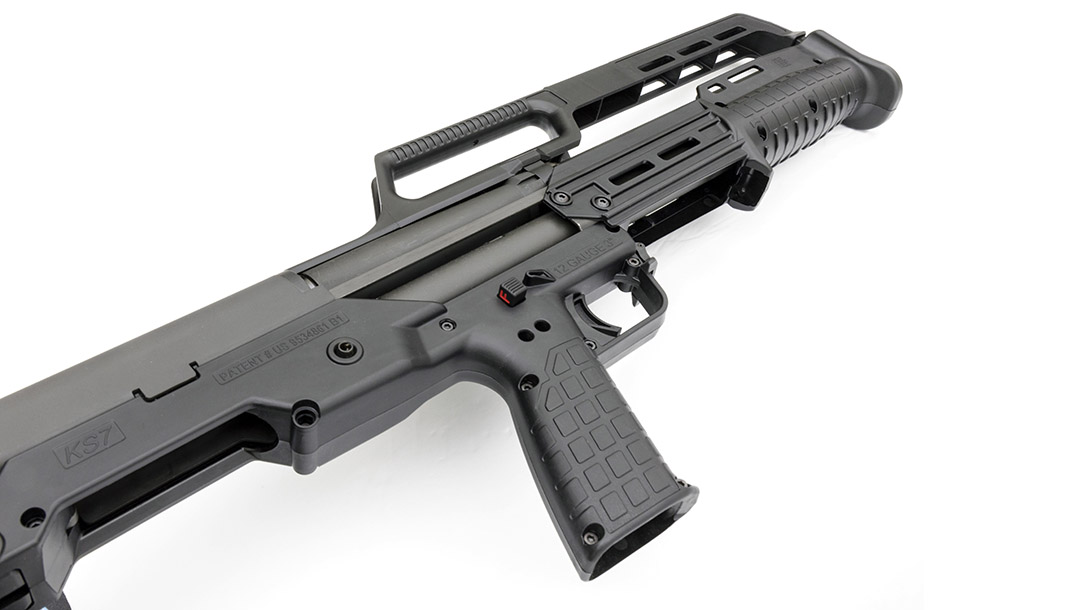 My test KS7 came with an orange chamber flag as well as an owner’s manual. When I examined the gun closely, I noticed a great detail of attention had been paid to the fit and finish. At the muzzle is a large screw-on ring that, in conjunction with the muzzle plate and magazine tube, keeps the cylinder-bore barrel secure out front. The muzzle plate also helps secure the forward end of the carry handle. And what looks like twin action bars running back from the forearm to the receiver are actually part of the bolt carrier. The action has a single internal actuation bar.

Two oval slots that act as loaded magazine indicators can be found on the right side of the magazine tube, just above the pistol grip. Peering into the ejection port, you will note the white plastic magazine follower. Jutting up from the bottom is a small outer catch that retains the shells. It has tiny ledges to make pushing it down easier when removing shells manually from the magazine tube. Two rails on the bottom of the bolt help guide the shells into the magazine. At the very rear, you’ll see the internal hammer on its retention pin. Triangular protrusions on both sides, just in front of the crossbolt safety, protect it from inadvertent activation. There are also M-LOK slots on the carry handle, forearm and stock for accessories, and the gun disassembles like an AR using frame pins.

With my son and photographer Jordan in tow, we headed to an outdoor range to test the KS7 between thunderstorms. It’s worth noting that the shotgun stowed easily in a Stealth backpack made by Elite Survival Systems.

Our first task was to pattern the KS7 with a variety of buckshot at 15 yards. For targets, I used some cheap Styrofoam poster boards with black paper on the front and back. The smallest pattern—just 5.24 inches—came with Speer’s Lawman 00 buckshot. The largest at 8.82 inches, came with Remington’s Express 00 buckshot. All of the pellets remained in the target area. They would have easily stayed within the K-zone of a silhouette target.

One thing we did note was that, when shooting with both eyes open and superimposing the green fiber-optic front sight on the target center, our shots were below and right of the point of aim. When it came time to test the Lightfield 546-grain Hybred EXP slugs on Birchwood Casey Dirty Bird silhouette targets, our groups impacted to the right and as high as 4 inches above the point of aim at 25 yards.

For a practical evaluation of the KelTec KS7, we decided on a home-defense-type scenario using an RE Factor Tactical silhouette. We then loaded the magazine tube with two Hornady #4 buckshot shells, two Speer Lawman 00 buckshot shells, two Remington Express 00 buckshot shells and two Lightfield slugs. Upon the signal, I disengaged the safety and fired the first two shots at 5 yards as if I were repelling a home invader. With the shotgun still covering the threat area, I tactically redeployed to 10 yards, fired two more shots, moved back again to 15 yards, fired two more shots, then, at 25 yards, I fired the slugs at the head and chest of the target while using a post for a barricade.

The first two shots at close range with the #4 buckshot produced what are known as “rat holes” fairly close to the point of aim in the target’s center-mass. If you believe shotgun patterns spread out quickly after the shot leaves the muzzle, think again. You need to aim!

At 10 and 15 yards, the 00 buckshot impacted mostly in the upper-right thorax and left shoulder/arm area of the target. At 25 yards, the center-mass slug went low and left, possibly impacting the lower rib cage. The headshot missed completely.

We fired a few more slugs at 25 yards using the base of the neck as the point of aim. We found the impacts were high and right, going just over the shoulder of the target. Obviously, holding to the left would help center the impacts with this particular KS7. My son and I liked the looks, weight and configuration of the KelTec KS7. I originally thought that the bullpup design might be rough on the cheek while firing buckshot and slugs, but I was wrong. While the recoil is pretty substantial, most of it is directed into your shoulder. The recoil pad worked well, too. But I’d like to see the butt extended down maybe 1 inch more for better recoil distribution. The forend can also be replaced with the kind found on the KSG, which is a nice touch, and the addition of a red-dot sight would help the shotgun get on target a bit better with some adjustments.

It’s tough pushing shells into the receiver from the bottom with the gun shouldered. There seems to be a sweet spot the magazine tube follower likes when feeding in shells. It’s best to turn the gun over with the ejection port up and slide the shells along the two rails that are perpendicular to the magazine tube. Another problem was double-feeds. This happened several times with all the test shells. I used up a number of shells, just working the pump action and shooting, to try to figure out what was happening. You can’t “baby” the pump action, but you also can’t go too fast and short-stroke it. Steady, measured fire seems to work best, but try and make that happen when things are fast and furious.

In the end, the KS7 has a great price and a lot of features that I really like. If you decide on one, experiment with different loads to find one that functions perfectly for your needs. Train with this gun and learn its eccentricities. It will be worth it if you want to employ it for personal and home defense or even law enforcement work. For more information, visit keltecweapons.com.

Pattern and accuracy in inches at 10 and 25 yards, respectively.

This article is from the March 2020 issue of Tactical Life magazine.