9 OF THE CRAZIEST KNIVES YOU NEVER KNEW EXISTED 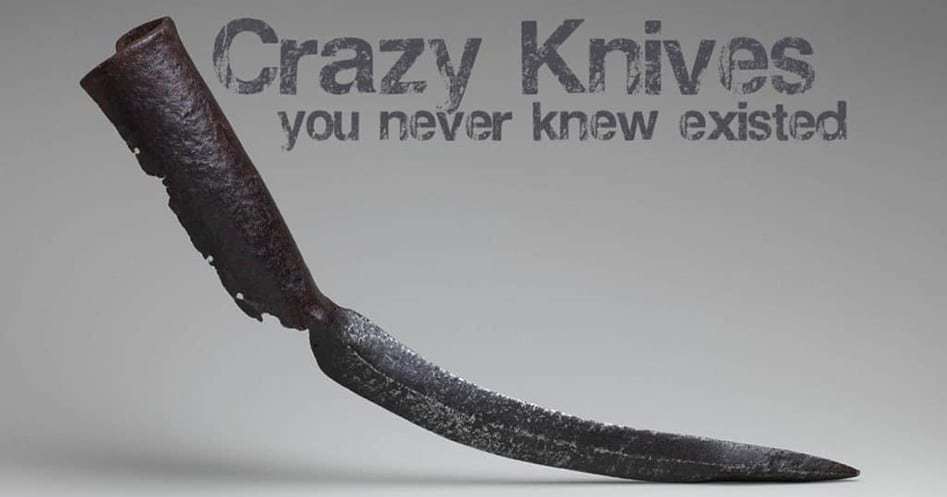 Well, that’s a bit of a sensational title, so maybe I’ll clarify it a bit!  They’re more like weird, scary and mysterious cutting implements that you don’t hear too much about!  That’s a bit more like it.  Here at Knife Up, we’re always looking for a unique twist on knives and related tools that give us the fodder for a good read, and make us feel we’re better informed for having taken the time to educate ourselves – plus it’s just plain gory or psycho too!  Ready for the ride?  Here we go!

This is a spectacularly intriguing use of a knife or sword.  Like a war elephant is not scary enough right?  I’m sure you don’t think about this every day, but when your mind does go to things like “how does one utilize a war elephant in battle?”, there are lots of options.  I’ve watched enough movies like Lord of the Rings to know they’re good for transporting soldiers on wooden platforms on their backs, and they have armor plates.  Even in real life, such famous generals like Alexander the Great and Hannibal of Carthage utilized (or fought against) war elephants.

One of scariest things about them is that they possessed two qualities that you might expect from a war elephant, but certainly not from any other.  The first is that they often had an actual sword fitted to each of their tusks (though this is a bit of a mystery to me since it occurs to me that God gave tusks to elephants as a natural-made weapon already in place!), and the second trait is that the elephant was actually trained to USE THE SWORD!  They were definitely trained to use their body/head as an offensive weapon (thus making the swords even more dangerous) but that’s not a real stretch given that they already had an innate knowledge of how to use their tusks in fights and skirmishes in the wild.

The sword was of course designed to be attached to the tip of an elephant’s tusks and as long as the beast had 2 tusks, they would both be outfitted accordingly.

War elephants were used for hundreds of years throughout India and much of what we know as the Middle East.  There are records of effective use of such swords over a thousand years ago.  Reports indicated poison was sometimes used on the tusk blades and a well-coordinated, young elephant could toss a man into the air and cut him in two!  That would be one heck of a spectacular (and emotionally scarring) event to behold in person!

Of the thousands of such swords that were likely made over the centuries, there are only 4 pairs that the world of archaeology has discovered.  It could be because much of the steel was reclaimed for other uses later in history, or that there are lots of graveyards and yet undiscovered remnants of epic battles all over the ancient world!  Will we ever know for sure? 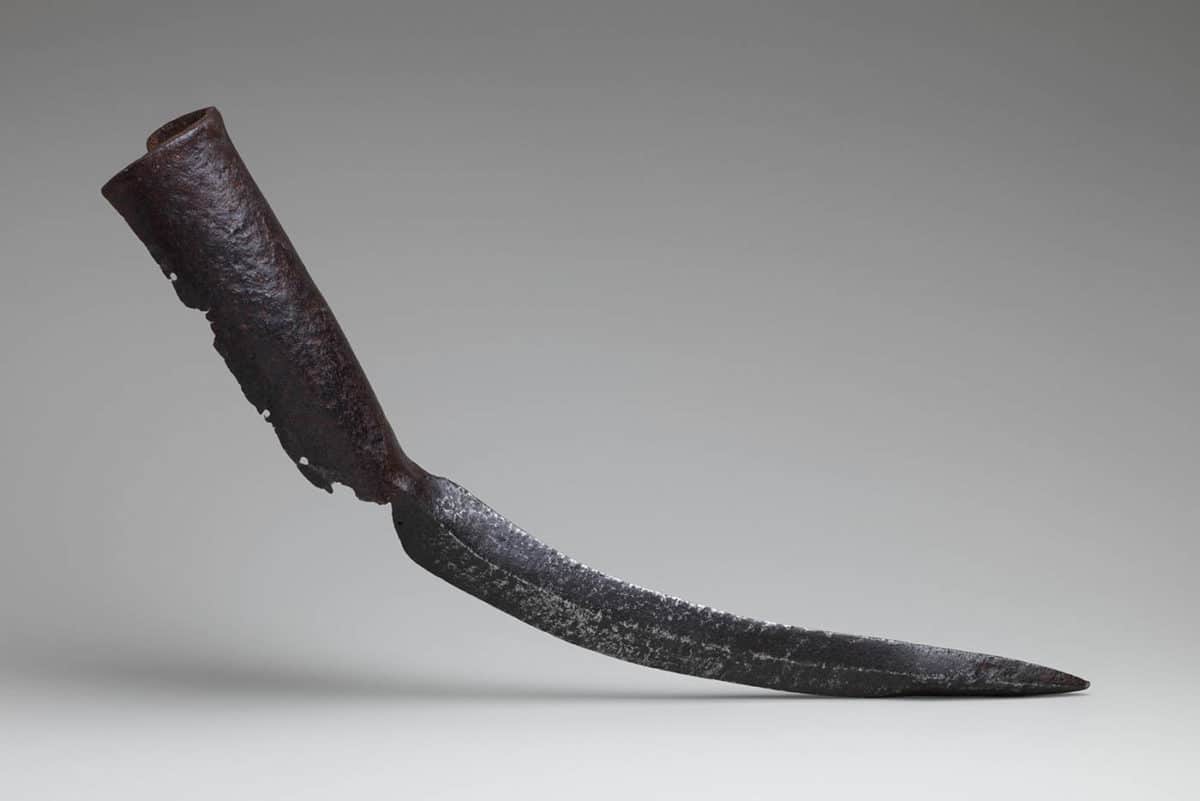 At its core, this weapon was meant to combine 3 elements of offense/defense for its user, and it was created early in the 1860’s.  It was made “famous” by the French underworld during that time which was known as Les Apaches (a group of thugs, thieves, muggers and street gangs). who roamed the streets of Paris in the early 1900’s.   The Apache revolver was meant to combine brass knuckles, a knife and a pistol into one neat package.  While it did just that, none of the components worked very well.  This is to be expected when you combine so many weapons – you can’t help but compromise.

One of the biggest issues is one that arose from one of its biggest advantages – it’s portability and compactness!  It could be folded and concealed easily in a pocket, but because of this advantage, the compromises were many.  For one, the barrel DID NOT EXIST!  The bullets shot directly out of the barrel cartridge so they had very little range and accuracy.  To its credit, it was relatively effective at very close range.

The second compromise was its flimsy dual-edged knife blade.  It was not solid nor large, and thirdly, the trigger had no guard which caused many an unwanted discharge!  The knuckles were not great, but they did work in a pinch.

By today’s standards the Apache was a disaster, but back then, it did the trick for many who lived a malicious lifestyle of crime. 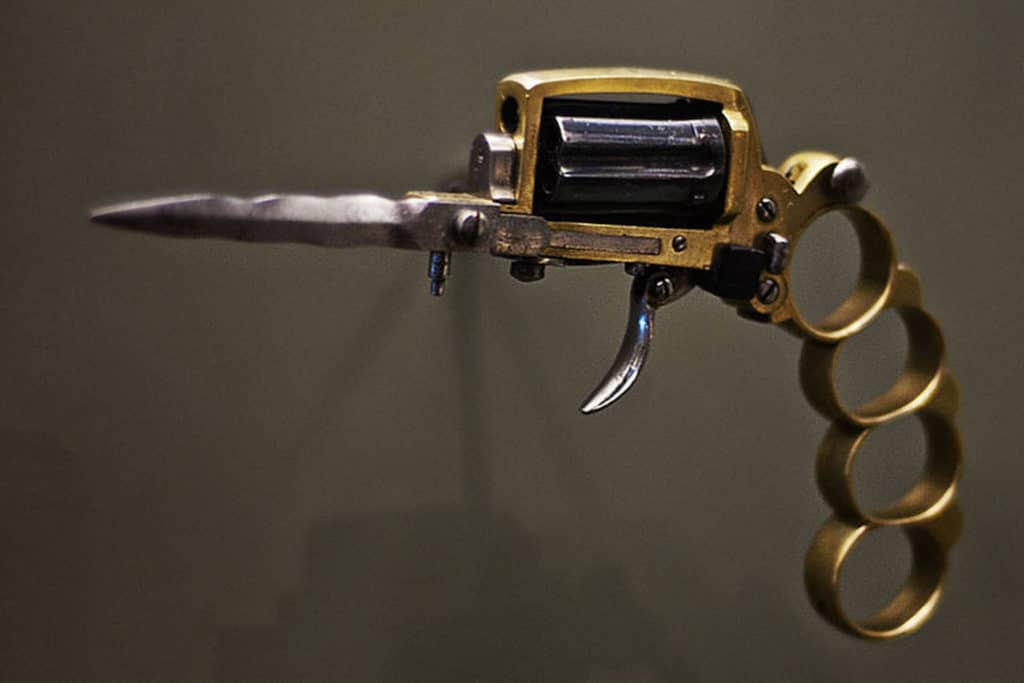 Ouch!  Do we have to go here?  If you’re one of the very few human beings who does not know what circumcision is, let me give you an update:  It’s the removal of the foreskin from the male penis, and it has been practiced since the start of history throughout nearly all cultures around the world.  It is performed for many reasons including culture, religion, and hygiene.

This particular knife was quite a nice tool for its time, but appears to be quite scary and draconian by more modern standards! 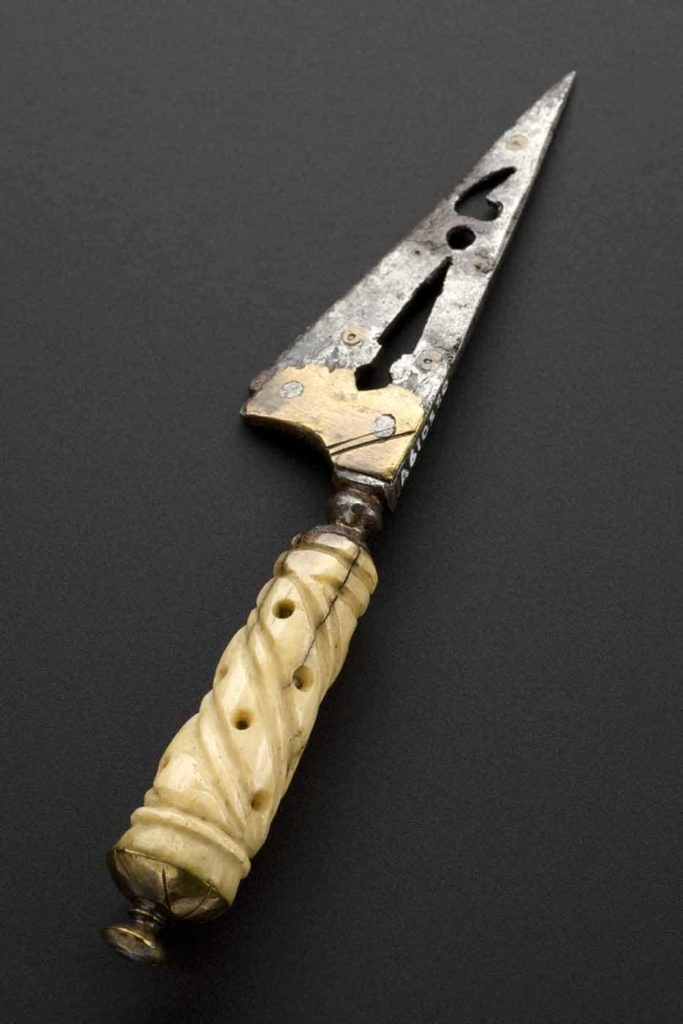 The practice of amputation is as old as human history!  It has evolved much over the millennia.  In more recent years, knives have given way to the more precise and effective saw, but that was not always the case.  Here’s a very curved amputation knife from the early 1700’s.  The practice of leaving some skin from the amputated section of limb to flap over the actual cut surface became more popular after this knife was created.  The new practice of leaving some extra skin demanded a straighter blade than this one. 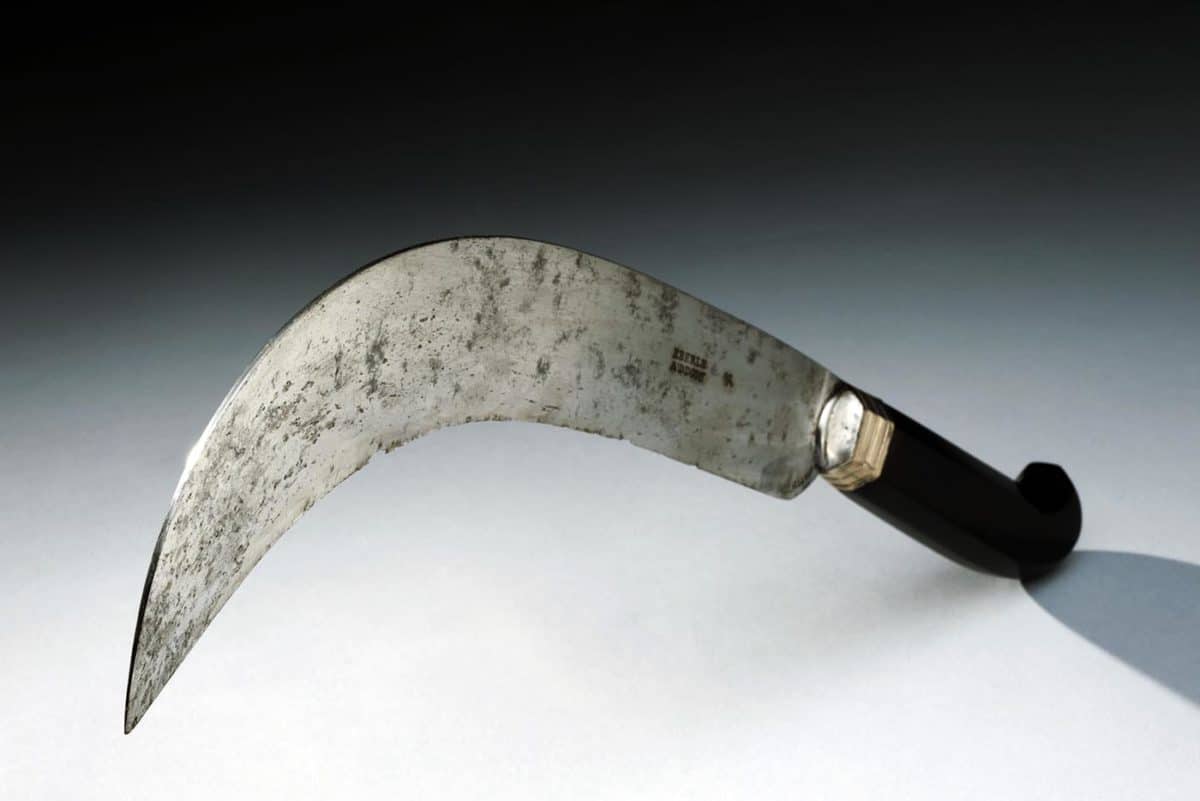 Between 1939 and 1945, the British Special Forces were supplied with many unique and concealable weapons for espionage work behind enemy lines.  This particular blade was meant to be hidden behind the lapel of a jacket and was just large enough to be legal in the right hands.  It was used primarily by the Special Operations Executive (SOE) which was an organization that few knew of.  It was given a variety of different cover names to confuse the issue further.  At least 13000 men and women worked directly or indirectly with the SOE during WWII in occupied Europe. 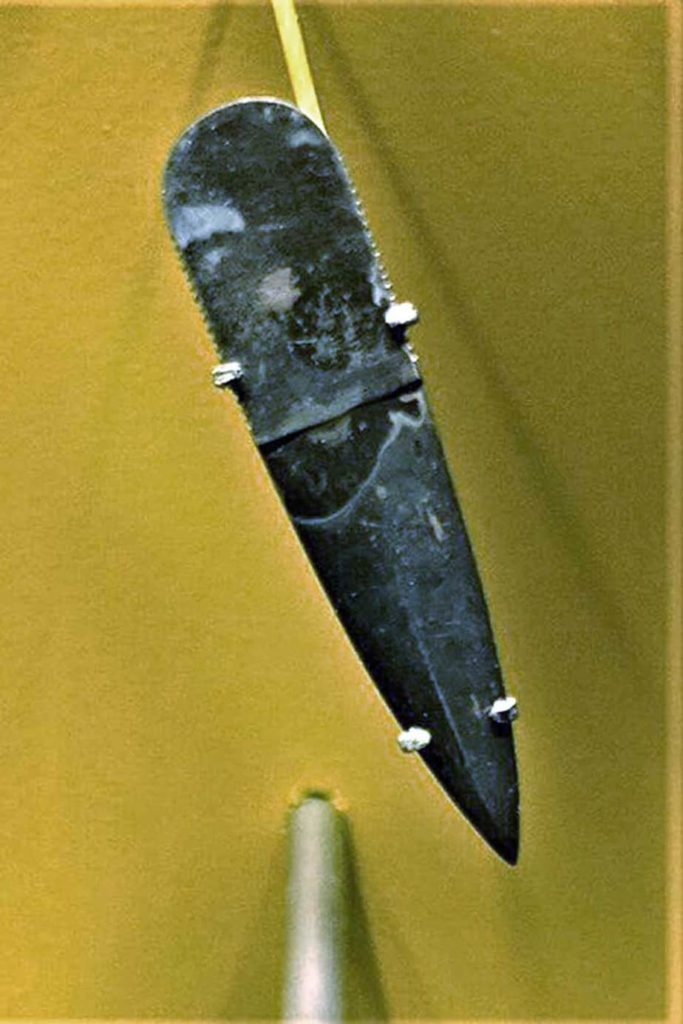 This knife is very similar to a dagger and was developed by a couple of guys who used to work for the Shanghai Municipal Police Force before WWII.  You can probably guess that the last name of one dude was Fairbairn, and I’ll leave you to guess the other guy’s!

This knife is very much tied to the British Commandos since it was made famous by their use.  It’s a knife that is optimized for thrusting and because of its double edge and relatively thin profile, its wound was often fatal without showing any outward sign of injury like profuse bleeding or carnage.  That’s exactly what a covert operative would want – death without attention!  I thought I’d include the knife in my list not so much because it looked so unusual but because of its history and ties to our victory in WWII.

In fact, the Fairbairn Sykes became so famous amongst the world’s elite fighting units that nearly every commando unit fighting for the Allies had a modified version of it which was derived directly from it.  Fighting commando groups from Canada, Australia, Belgium and the Netherlands all had Fairbairn Sykes (esque) knives!

In 1838, history saw the birth of what we can only call a “cutlass pistol”.  It was really a .54 caliber pistol that fired only a single shot.  Attached to the underside of the barrel was an 11.5 inch Bowie knfe blade and its intended use was very specific!  It was made for U.S. Navy boarding parties.  Even more specifically, it was meant to be used by the Wilkes-South Seas expedition.  As the history goes, they were used with some effectiveness again Fijian warriors who attacked U.S. sailors on the island of Malolo.  We wish the news was all good on these brutes, but alas, the bad news;

The pistol swords or Cutlass Pistols fell out of favor quickly due to their expense, but even more due to the fact that everytime someone tried to combine multiple weapons into one, too many errors are the unfortunate result.  In the case of the cutlass pistol, it was basically a very heavy pistol and a very heavy, unbalanced (and too short) sword.  That would also be known as the “worst of both worlds”. 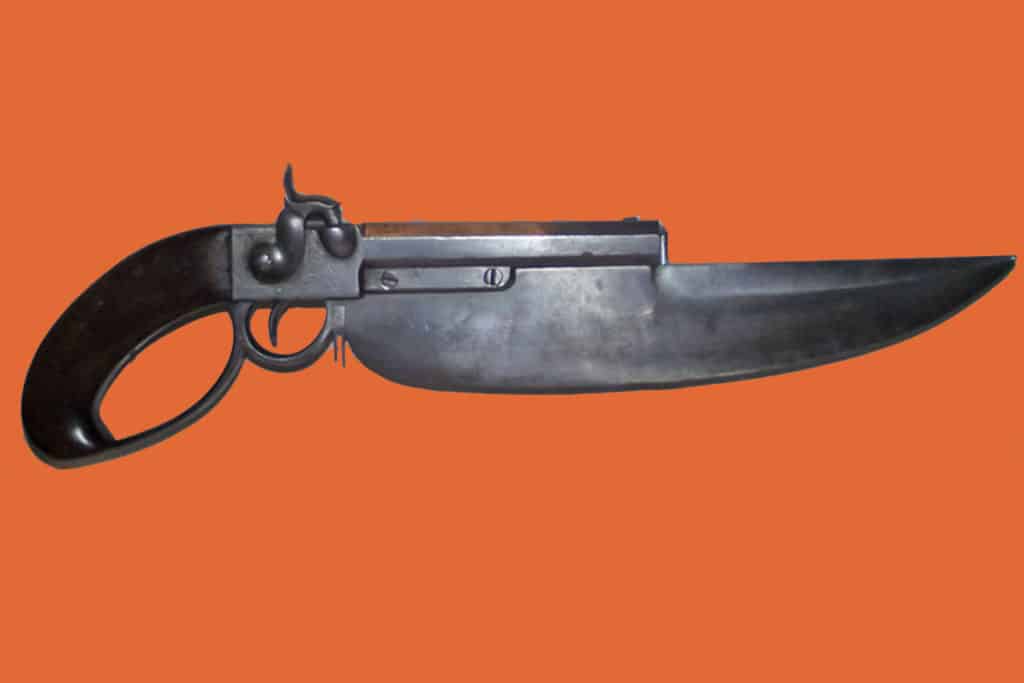 Also known as a knuckle knife,  the trench knife was developed for WWI close quarters combat.  As you know, WWI is known for its long stalemates between two armies and its trench warfare.  This weapon was designed to help give advantages to the bearer of the knife.  Interestingly, it was primarily the soldiers themselves who made them from bayonets issued with their rifles.  They were shortened bayonets attached to metal knuckles.  They were so popular that countless soldiers from both armies used them and continually developed their design.
Eventually, due to their popularity, the U.S. government began issuing official models to fighters in multiple branches of the military.  Unfortunately, the new government units (Mark 1 Trench Knife) had too many faults to be loved.  Its brass knuckles were really heavy and the blade tended to snap if used for utility purposes such as prying.  In addition, it was not very effective for utility use at all.
Eventually, the military replaced the trench knife with a similar knife (Ka-Bar) which served well as both combat and utility knife. 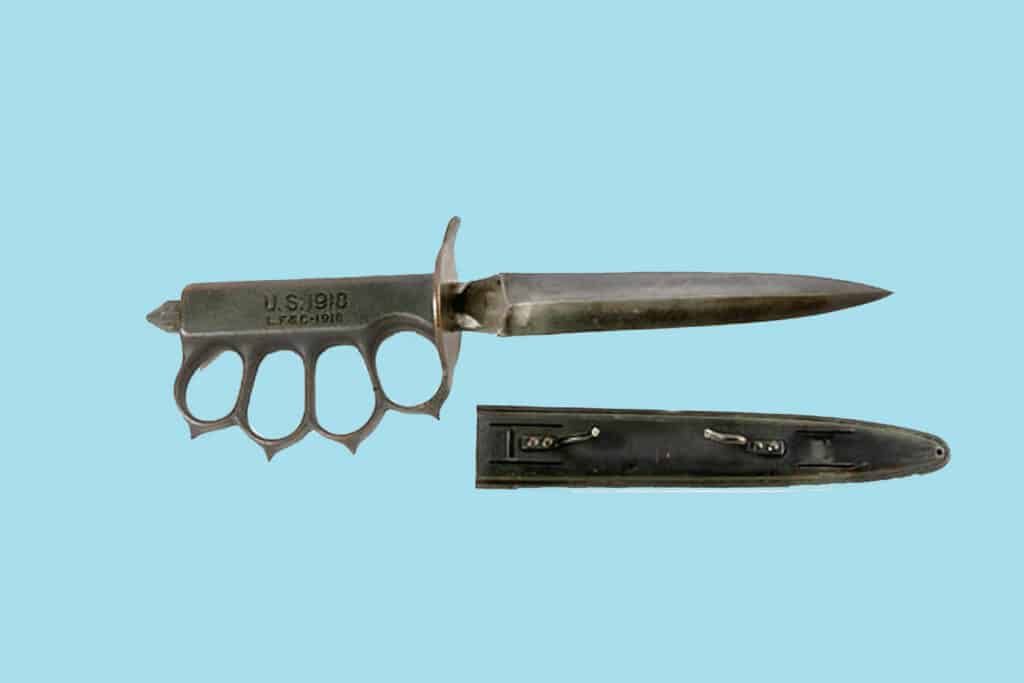 THE WWI TRENCH KNIFE WHICH WAS REALLY POPULAR – UNTIL THE MILITARY STARTING MAKING THEIR OWN VERSIONS!

Here’s another knife that’s not so unique-looking as it is famous.  It’s the knife used by “Lincoln-killer” John Wilkes Booth.  The interesting point to this weapon is that it was not used to kill Lincoln himself (right?  Remember he was shot!).  However, the knife was actually used to stab another guy by the name of Major Rathbone about 1 minute after the Lincoln shooting.  Having seen the actual assassination (or the “assassin” as Rathbone declared in court),  Rathbone lunged at Booth where a scuffle began.  Booth thrust his knife at Rathbone who parried the thrust enough to save his life, but received a wound in his left arm which was several inches deep.
On a sidenote, I bet you didn’t know that after Lincoln was shot, the attending doctor thought he was stabbed (after seeing Booth running accross the stage with his knife).  The good doctor found the bullet in Lincoln’s head and when he removed the blood clotting (and thus the pressure on his brain), Lincoln actually had a pulse!  Go figure.  The rest is history and I guess that pulse didn’t last long, but it’s a bit of the story I never knew! 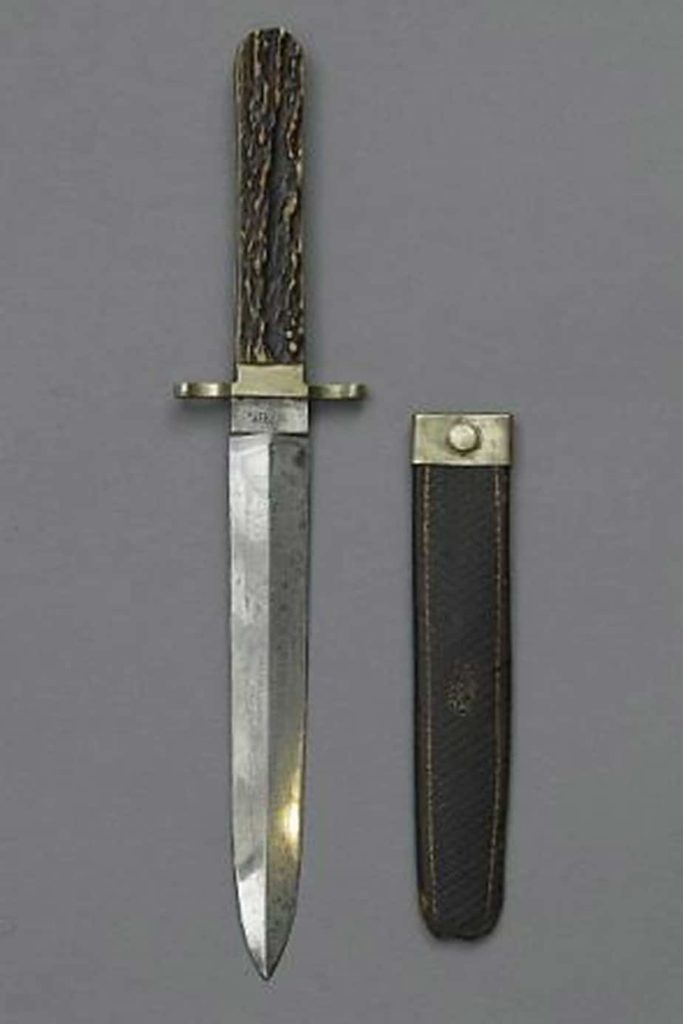 THIS KNIFE WAS USED BY ABRAHAM LINCOLN’S KILLER JOHN WILKES BOOTH TO STAB HIS WOULD-BE CAPTOR JUST SECONDS AFTER THE ASSASSINATION.

I trust you enjoyed our abbreviated, macabre walk through “knife history”.  Let me know if you have a better example and I’d be glad to add it at a later date.
Oh, and before I go, here are two implements that deserve an honorable mention due to their intrigue and curiosity factor; 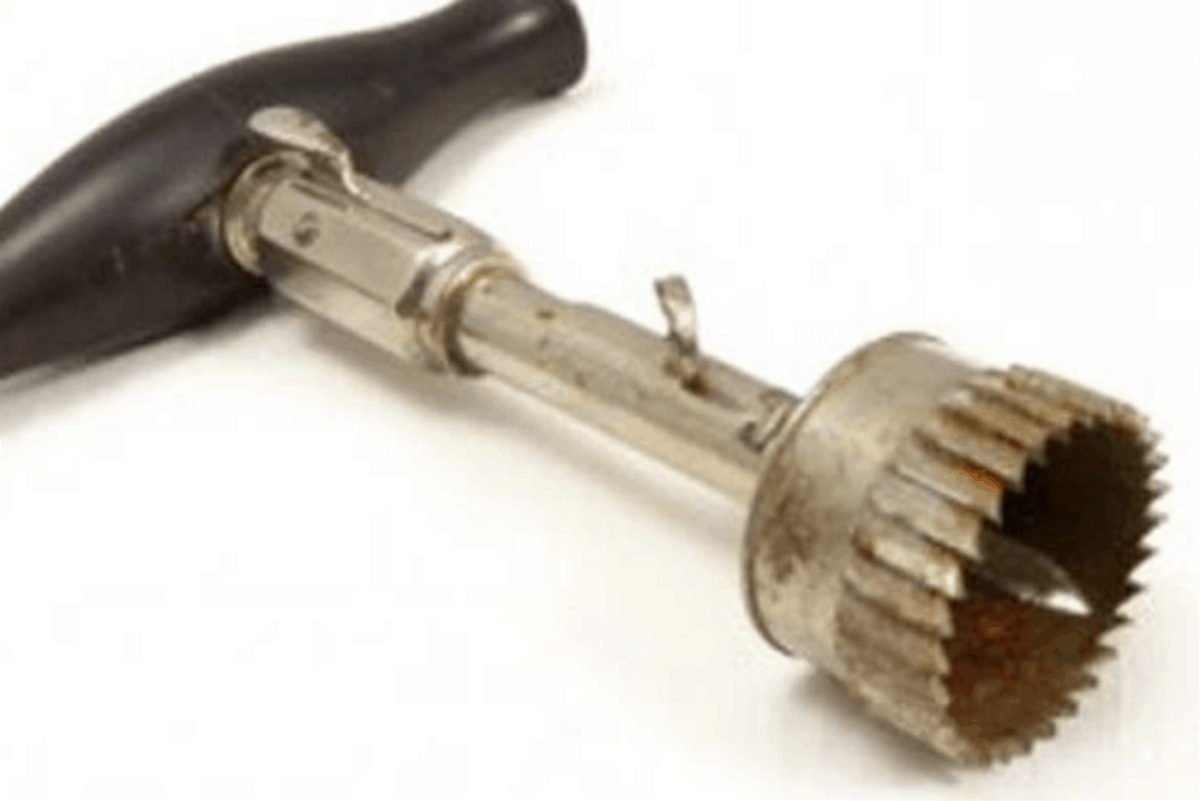 A TREPHINE FROM THE 1800’S. IT WAS USED TO BORE A HOLE INTO SOMEONE’S SKULL!