WITH ITS AR500, BIG HORN ARMORY SET OUT TO BUILD THE MOST POWERFUL SHORT-RANGE SEMI-AUTO AR IN THE WORLD, AND THE RESULTS DON'T LIE.

The start of a new century seemed to wake up designers in their quest to expand AR roles via caliber enhancement beyond 5.56mm or even .308 Win. The urge to expand AR rifles beyond .22 caliber “poodle shooters,” while still taking advantage of their ergonomics, has led to interesting cartridge creations; the Big Horn Armory AR500 chambered in .500 Auto Max is an excellent example of this.

The .500 Auto Max is the brainchild of Greg Buchel, President of Big Horn Armory, in collaboration with Tim Sundles of Buffalo Bore Ammunition. The .500 Auto Max is essentially a rimless .500 S&W Magnum. It is reloadable with the same dies, shell holders, and load data. However, it requires a taper crimp due to the 500 Auto Max headspacing off the case mouth versus rim.

The .500 Auto Max can chamber and fire in any revolver or single shot chambered for the 500 S&W. However, the reverse is not true. Due to taper crimp with the .500 Auto Max, revolver users must pay heed to bullet shifting forward after a few rounds fired in a cylinder due to jarring recoil forces.

The purpose of the .500 Auto Max is to generate unprecedented “stopping power” at short to moderate ranges out of the AR platform. With 350-440 grain loads from Buffalo Bore and Steinel Ammunition generating velocities of 2,300 fps to 1,900 fps, respectively, a 175-yard zero will give a relatively flat trajectory out to 200 yards; 2 inches high at 50 yards; +3 inches at 100 yards and dropping -3 inches at 200 yards. The .500 Auto Max’s heavy, large-diameter bullets make it well-suited for use against engine block or large hog; the same can be said for assailants with body armor or a charging irate bear. It passes through automotive body panels as easy as a deer cavity. 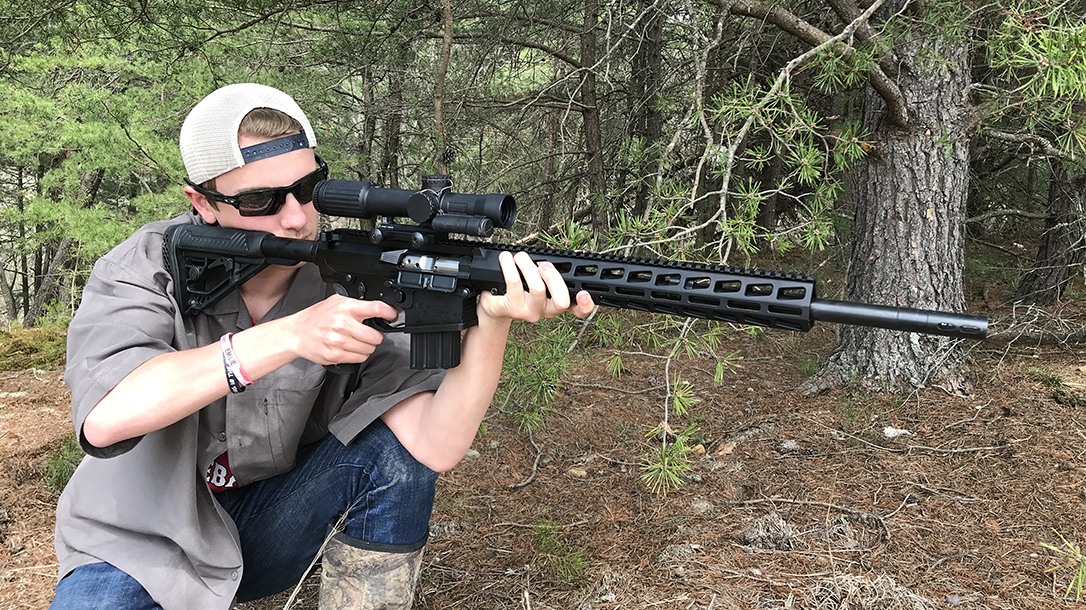 Big Horn Armory based its AR500 on the AR-10 platform with intent of creating the most powerful short-range semi-auto AR in the world. The bolt head had to modified to accommodate the .520-inch rim of the .500 Auto Max cartridge. Big Horn engineers then figured optimal location of the extractor and ejector for proper function. The 18-inch, 1:24 twist barrel is stainless steel. Big Horn gives it a nitride, surface-hardening and corrosion-resistance treatment. It also has a Rockwell C rating of 82. It arrives with muzzle brake threaded on via ¾x28 tpi. An adjustable gas block ensures reliable function no matter load chosen for use.

The AR500’s handguard is a free-float M-LOK pattern setup. Meanwhile, its bolt carrier group features a nickel-boron coating, offering less friction during operation and ease of cleaning. Certainly, performance enhancing traits. The AR500 features an ambidextrous selector and bolt catch. It also has a gem of a trigger, measuring 3-3.5 pounds pull weight.

An interesting detail with Big Horn Armory AR500 is use of AR-15 size magazines, even though AR500 is based on AR-10 receiver. The modified AR-15 magazine is single stack. It provides better feed geometry for the sausage sized straight wall .500 Auto Max cartridge. The typical AR-15 follower is modified and a stout 30-round magazine spring fitted under the follower to make sure next round is ready for presentation as the bolt comes forward.

While there is no denying the parent cartridge .500 S&W as one of the most powerful handgun cartridges, the .500 Auto Max achieves full potency thanks to the 18-inch barrel of the AR500, adding up to 400 fps for certain loads. The Big Horn Armory AR500 has amped up the cartridge to a serious, big game-hunting rifle cartridge.

The Big Horn AR500 .500 Auto Max can effectively harvest any animal. A Buffalo Bore 440 grain Hard Cast load with 1,900 fps velocity generates close to 4,000 ft/lbs of whup ass. Three quick rounds out of the AR500 is equal to the enormous power of a .50 BMG. Dangerous big game hunters know that ft/lbs should not be only criteria for cartridge selection. Bullet diameter, shape, and construction play important roles. The .500 Auto Max checks all these boxes as well. 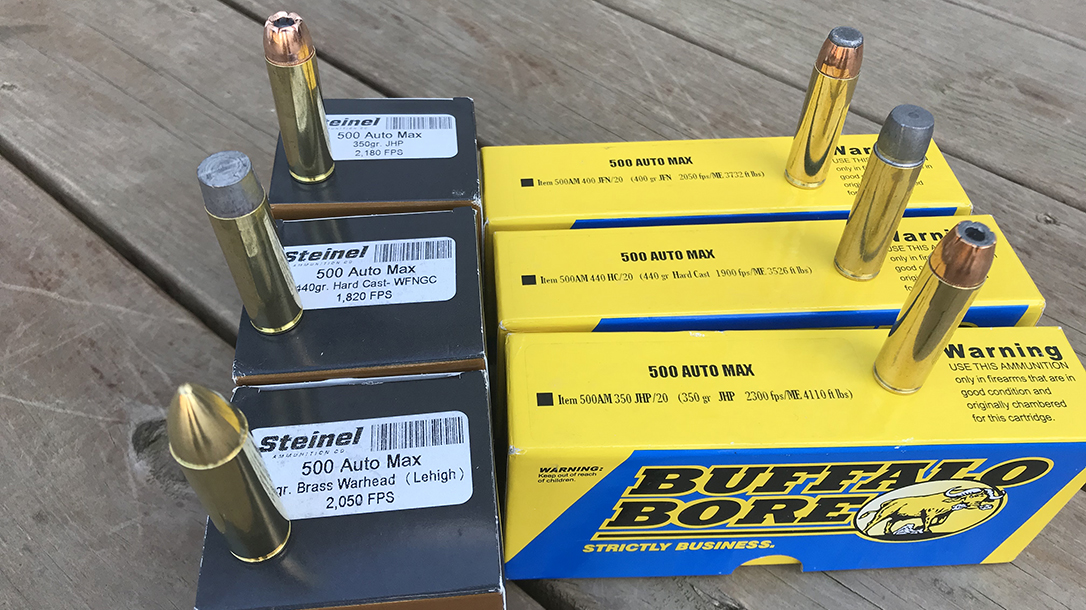 Set Up for Success

I used a Trijicon 1-8x VCOG with Illuminated Reticle for my Big Horn Armory AR500 Test. Trijicon designed its VCOG for both instinctive close-range/low-magnification situations with variable intensity red illuminated reticle. Yet, it still allows shooters to engage targets with greater precision at longer ranges thanks to the 8x capability. The VCOG’s 1-8x power range and reticle configuration eliminates the need to use multiple optics as scenarios change. With the VCOG attached, the Big Horn Armory AR500 produced consistent 1.75 inch or better groups at 100 yards.

Field testing consisted of work on Echo Valley Training Center’s (EVTC) Jungle Walk Range. The ability to move through its varied terrain and engage randomly placed targets hidden within cover suited the Big Horn Armory AR500 evaluation perfectly. Ranges involved varied from 35 to 150 yards with multiple shots fired at most of the targets. The low 1x setting on the Trijicon VCOG allowed for a wide field of view and quick target assessment/engagement. A quick crank of the magnification knob allowed for easy targeting of longer-range targets. The Big Horn Armory AR500 proved to “hang” well and was very manageable in getting into and out of field shooting positions.

The inherent familiarity most have with the AR platform, not to mention its top-notch ergonomics, validates Big Horn’s decision to utilize it with enhancement via caliber expansion. In designing and building the AR500, Big Horn Armory has taken a proven weapon system and made it better. The Big Horn Armory AR500 places real power in a compact, accurate, and reliable package. The ability to reliably engage targets out to 200 yards with great terminal effect cannot be underestimated. For more information, please visit BigHornArmory.com.

*Bullet weight measured in grains, velocity in fps by chronograph, and accuracy in inches for three, five-shot groups at 100 yards.